As long as humans have existed there has been corruption and deceit, but I have never seen anything like this in my lifetime.

Suddenly, merely ASKING a question about a “vaccine” that is (for the first time in medical history), indicated for EVERYONE, is likely to get you flagged.

Sure, people are dying from Covid, but they’re also dying or having serious problems from the jab. An unvaxxed radio friend is fighting for his life, sick with Covid. A friend’s husband is fighting for HIS life after being given the jab, AFTER he’d recovered from Covid. Three strokes, paralysis, hospitalized for four months. Grim prognosis. He had RECOVERED from Covid. He may not survive the jab.

“Rare” vaccine reaction, you say? Sure, unless it’s YOUR husband or teenager. But death from Covid is also RARE.

Jabs have caused blood clots in some people, heart problems and many other medical reactions, including death. Trust me, it’s happening, even if you don’t see it on CNN. You have to work harder than ever to find any discussions about the other side of the issue.

Have you wondered why we no longer do autopsies to investigate unexplained deaths? That used to be routine, unless you died under a doctor’s care. Not anymore. We’re not even curious.

Think about it – if a vaccine worked, why would it matter whether or not I had one? You’re risking your life every day around perfect strangers in stores, etc. You have no idea what diseases they carry.

And let’s not even talk about who’s coming over the border with God-knows-which diseases. Don’t even look in that direction. Blame your unvaxxed family member instead!

Censorship is rampant. Recently I posted a video about Nevada’s Clown-in-Chief, Governor Sisolak, who issued Directive 49, changing the mask rules yet AGAIN, to make things easier for his beloved Raiders.

In case you’re following along at home, a few weeks ago he mandated that everyone in Clark County wear a mask indoors even after they’d been vaccinated. Now it’s not required at STADIUMS or other large venues if you’ve been vaccinated? Large venues can “choose” to allow you to go without a mask, but not WalMart or the local Mom and Pop?

They said, “if you get the jab, you can return to a normal life”! Joke’s on you. Suckers. You STILL have to wear a mask, 8 hours a day, while vaxxed Raiders fans can ditch theirs. If I were a vaxxed employee, I’d be furious.

YouTube TOOK MY VIDEO DOWN, for “medical misinformation”. I have NEVER offered medical advice to ANYONE. I’m not qualified. I have NEVER told anyone to NOT get vaccinated. That’s a personal choice. But when they start taking videos down merely because you’re critical of incompetent and arrogant leaders, “Houston, we have a problem. A BIG one.”

Friends are turning on friends. Families are being torn apart. I have older relatives I likely won’t see before they die because of this pandemic. It’s terrible. And it’s not an accident. This has been the plan all along. Keep us off kilter, keep us at each other’s throats. Then we won’t pay attention to what’s happening behind the curtain.

Now that the untested jab doesn’t have the magical powers they promised, they’re blaming unvaxxed people for the problem, and of course, recommending you get a “booster”. Who didn’t see THAT coming?

Everyone should get this “vaccine”? Everyone can’t take aspirin. Never has there been a treatment everyone could or should take. My dad was allergic to penicillin, for example. We should ALL get this jab? Pregnant women, teens, those with auto-immune or heart problems, old people, fat people, Covid recovered people, EVERYONE???

The insanity has been pushed by arrogant “Public Health Officials”, who either have a financial interest in the jab or work for conglomerates who will fire them for speaking out. Same thing, right? The Independent Family Doctor is largely a thing of the past.

If you believe that 99% of doctors are onboard with the jab, you’re wrong. Many dissenters are out there, but they have been cancelled from most media. They’ve boldly spoken out, but you won’t see them on Cable or local TV, sponsored by Big Pharma.

Nurses are being told they can’t discuss the vaccine. Have you wondered why so many of THEM haven’t gotten it? Perhaps they’ve seen a few things CNN isn’t reporting?

If medical professionals who disagree with the company line are so crazy, why the attempts to silence them? Sunlight is the best disinfectant, right? Whatever happened to that “second opinion” we used to value? Don’t you see this?

It’s ironic how many people refuse to believe in a benevolent God, who created us and loves us unconditionally, but somehow those same people think public health officials and politicians have their best interests at heart. It’s frankly astounding. In the words of John McEnroe, “you cannot be serious!”

Here’s a great, well researched column, breaking down many of the arguments against vaccines. I’ve posted it in the past, but it’s worth sharing again.

Medical professionals are as compromised as anyone else. Many are buying into the vaxx hype, and others are flat-out lying. They know that concerns are warranted, but they want to keep their jobs, cars, and houses. Don’t make people in white coats out to be gods.

My personal objection to the jab has nothing to do with my faith. I don’t see this as a spiritual issue. Many of my Christian friends have had the jab. I have had tons of vaccinations over the course of my life. My objection to THIS one is twofold: the fact that it was rushed to market, (I said the same thing when Trump was President), coupled with the fact that anyone who speaks out is silenced.

I am relying heavily on my faith to get through this distressing time. I’m not fearful, because I know God is in charge; I am sad for my nation and my world. Sad that so many are willing to give up so much with no resistance, and believe what corrupt people tell them without question.

He knew this was going to happen and He will get us through it. One thing I know for certain – public health officials won’t.

Now National Review has surrendered regarding the jab! Who’s left? 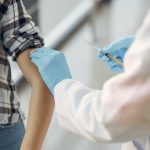 TODAY’S THE DAY! MY NEW SHOW BEGINS!
Scroll to top