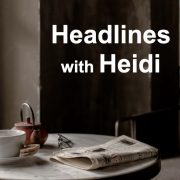 It's not "fake news" just because you don't like the source

Heidi Harris Show Podcast #242: What Trump should do on his way out

Dr. Michael Brown reminds us that Trump was never our Savior