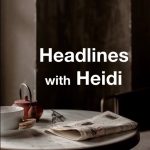 Headlines with Heidi! 3/9/22 When you want a prince, but your baggage won’t...
Scroll to top